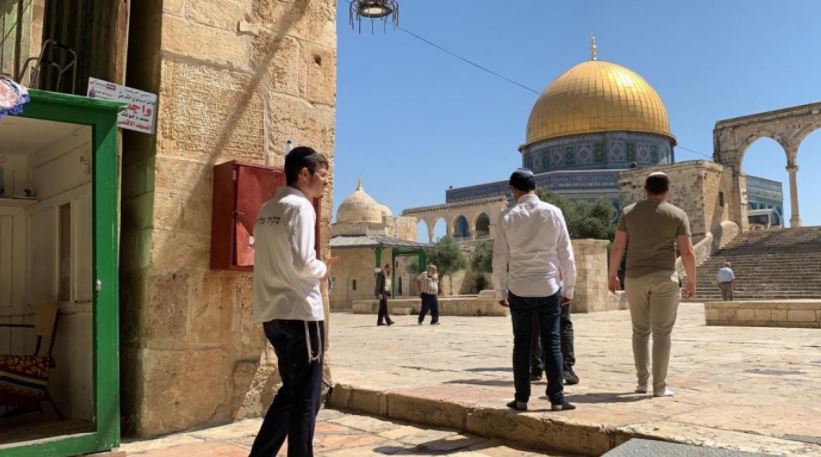 The Jerusalem Islamic Waqf said that settlers had toured the site 'provocatively', having entered from the Morrocan Gate

Dozens of Israeli settlers broke into al-Aqsa compound in occupied East Jerusalem on Wednesday, flanked by police officers, as Israeli authorities placed restrictions on Palestinians entering the mosque in the Old City.

Jerusalem Islamic Waqf, which manages and administers Islam's third-holiest mosque, said that 61 settlers had toured the site “provocatively” after entering from the Moroccan Gate.

The Waqf said that the identities of Palestinians entering the compound were checked by Israeli police at the gates.

Al-Aqsa Mosque was one of the flashpoints of the violence in May. Israeli forces stormed the site in the month of Ramadan and assaulted Palestinian worshippers, firing rubber-coated bullets and tear gas at them.

Israeli settlers regularly tour al-Aqsa compound through the Moroccan Gate, which leads to the Western Wall plaza. They are always accompanied by police and members of the intelligence services, and sometimes by Israeli officials, including ministers and Knesset members.

In May, Israeli settlers were not allowed to enter al-Aqsa compound for almost 20 days during Palestinian protests in Shiekh Jarrah and Damascus Gate, and later the bombing of the Gaza Strip.

They resumed their tours on 23 May, two days after a ceasefire was announced between Israel and Palestinian factions in Gaza, including Hamas and Islamic Jihad.

Two days before, Israeli security forces fired rubber bullets, stun grenades and teargas at worshippers who had gathered to celebrate the announcement of the ceasefire.

At the height of the Covid-19 outbreak, in early 2020, the compound was closed altogether for 69 days, finally reopening on 31 May.  During the closure, Israeli authorities still allowed settlers to tour and enter the site.

Elsewhere, Israeli forces arrested 17 people in various cities of the West Bank, including Nablus, Ramallah, Bethlehem and al-Bireh on Tuesday night and Wednesday morning, according to the Palestinian Prisoners' Club, an NGO.

On Wednesday, Fadi Sadiq Mousa Washhah, 34, from the village of Birzeit, north of Ramallah, succumbed to his wounds, two weeks after being shot by the Israeli army at the entrance of al-Bireh, near Ramallah.

Washhah was shot in the head with a live bullet, according to the Wafa news agency, and placed in intensive care.

He was a former political prisoner who spent a total of eight years in Israeli jails, five of them while studying political science at Birzeit University. He had been wounded several times during confrontations with Israeli forces.

Washhah became the 35th Palestinian to be killed by Israeli forces or far-right settlers in the occupied West Bank and East Jerusalem since protests against the Israeli forced eviction of residents of Sheikh Jarrah started in early May.

Two Palestinian citizens of Israel were also killed in May: Mousa Hassouneh in Lod, and Mohammad Kiwan in the town of Umm al-Fahm, in the north of Israel.