Another Gaza medic has been killed on duty by Israel, but nobody expects justice to be served 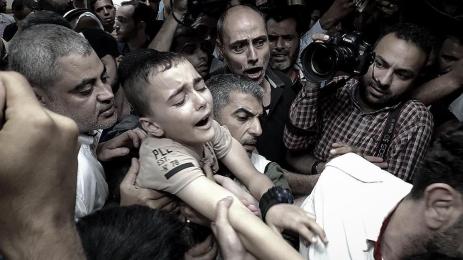 Al-Judaily was the fifth paramedic to be killed by Israeli forces during the Great March of Return protests; more than 500 others have been wounded

It was a difficult moment for the wife of Mohammad Al-Judaily when she heard that he had succumbed to his wounds. The paramedic was 37 years old when he was shot in the face by an Israeli sniper while providing first aid to participants in Gaza’s Great March of Return protests on 3 May.

“At first,” explained Muna, 31, “when we heard that he was shot at work, I thought he would come home at the same day because I was told he was hit by a rubber bullet. I was shocked when he died; I had a lot of hope that he would recover and come home.”

The mother of four spent a lot of time at her late husband’s bedside, dreaming that he would return and be able to play with their children. It was not to be.

Al-Judaily worked with the Palestinian Red Crescent (PRC). On that fateful day at the beginning of May, he joined the emergency medical team which headed to Abu Safiyeh protest site east of the northern Gaza city of Jabalia.

“I asked him to stay at home and have a rest that Friday,” said Muna. “That was the first time I had asked that since the protests began last year, but he insisted on going to help the protesters. He stressed that everyone must be loyal to his work and colleagues.” 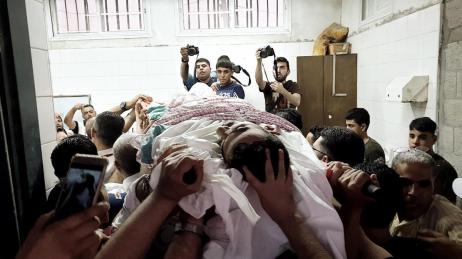 When she was told that he had been shot by a rubber bullet, she rushed to the hospital. “The rubber is simply a cover for a steel bullet,” she pointed out, “so I found him seriously wounded in the face. Even so, I did not expect him to die.”

The PRC’s Dr Bashar Murad noted that Al-Judaily was wearing a clearly-identifiable paramedic’s uniform when he was shot. “He was rushed to Al-Shifa Hospital where doctors found fractures in his face, but their assessment was that his wounds were not life-threatening.” However, he started to haemorrhage for three days, so the medical team put him into intensive care and then transferred him to Al-Quds Hospital, which is a private healthcare facility run by the organisation and where, according to his widow, Al-Judaily started to feel better. “There was 24-hour care provided by the PRC doctors and Mohammad’s colleagues.”

On 3 June, his wife and children persuaded Al-Judaily to leave the hospital in order to spend the holiday of Eid Al-Fitr, which marks the end of holy month of Ramadhan, with them at home. “That was the worst decision he ever made,” she sobbed.

Doctors at Al-Quds Hospital and the Ministry of Health in Gaza had decided that he needed treatment unavailable in the enclave’s hospitals. “We applied for a transfer for him and the Ministry of Health in Ramallah agreed to pay for his treatment,” said Dr Murad. “However, the Israeli occupation authorities did not issue a travel permit. Two days before Eid, his wife insisted that he should spend the holiday at home. At first, the doctors refused, but after many requests by his wife, they agreed to discharge him at his own risk.” 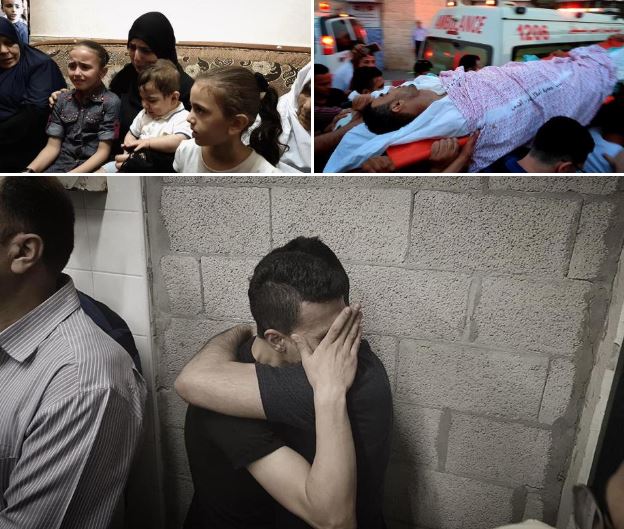 Mohammad’s eldest son, Adel, said that he and his siblings were happy that their father was with them for Eid. “At dawn the following day, though, he fell unconscious and had convulsions,” explained the 11-year-old boy. “My mother called the ambulance and the paramedics arrived within minutes, but his heart had stopped beating.”

Dr Murad said that the paramedics did CPR for half an hour before his heartbeat re-started, and then took him to the hospital. Later on the same day he was transferred to Al-Ahly Al-Araby Hospital in the West Bank city of Hebron, but it was too late.

The lack of oxygen to the brain during that crucial first thirty minutes of CPR was too much to bear, and his condition deteriorated. Nevertheless, Mohammad Al-Judaily was kept alive in the ICU at Al-Ahly Al-Araby until he passed away earlier this week. His body was taken back to Gaza, where tens of thousands attended his funeral.

Dr Murad has accused Israel of committing yet another war crime because it was very clear that Al-Judaily was a paramedic and he was very far from the soldier who shot him. The PRC, he said, has filed a complaint at the office of the UN Human Rights Commissioner.

However, nobody expects to see justice served for Muna and her four children, the youngest of whom is just seven months old. Al-Judaily was the fifth paramedic to be killed by Israeli forces during the Great March of Return protests; more than 500 others have been wounded. All were wearing clothing and insignia which identified them clearly as medical personnel, but Israel continues to be allowed to act with impunity, despite its deadly and disproportionate response to the legitimate protests.