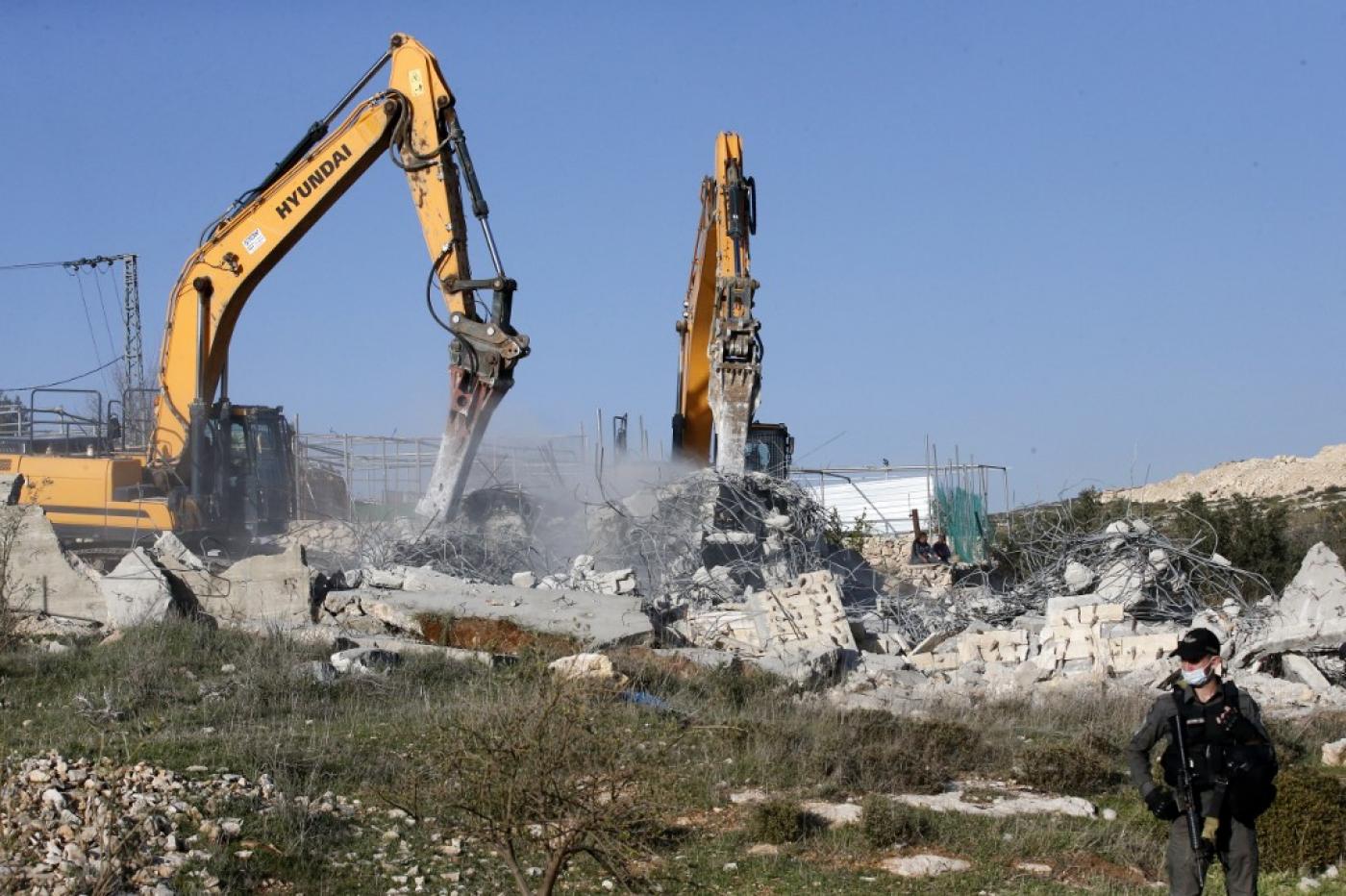 Progressive Jewish group J Street says if US president is serious about backing two-state solution he must investigate Israel's use of US aid, equipment and weapons contracts

A left-leaning Jewish advocacy group called on the Biden administration to ensure that no US weapons, funding or equipment are used in Israeli demolitions of Palestinian communities, following the destruction of one such community earlier this week.

J Street, in a statement on Thursday, asked US President Joe Biden to investigate Israeli demolitions to determine whether US-sourced defence materiel was used to demolish Palestinian homes, and whether such a use violates the Arms Export Control Act (AECA).

Earlier this week, Israeli forces demolished homes and other structures in the Palestinian village of Khirbet Humsa, in the northern West Bank's Jordan Valley. Forces confiscated the Bedouin community's tents and livestock pens, bulldozed several structures, and attempted to forcibly transfer its residents to a new location.

Israeli authorities said the community had been constructed illegally on a military firing range, and that residents had rejected their offer to move to a nearby area.

At the time, Khirbet Humsa's 130 inhabitants vowed to stay, with some sleeping on mattresses with plastic tarpaulins strewn on the rocky soil after the demolition.

The destruction was the second time in three months that the community had been demolished by Israeli authorities, but the first time such a major demolition had taken place during the Biden presidency.

"This demolition is just the latest example of the Israeli government's systematic policy of de facto annexation of sensitive areas of occupied territory - a policy that includes demolitions, evictions and destructive military training operations on Palestinian lands, all of which have taken place in just the two weeks since the new president's inauguration," J Street said.

The organisation said that if the Biden administration were serious about its support for the two-state solution, it should investigate such incidents and "make clear to the Israeli government that US-sourced defense articles, as well as any material purchased with US Foreign Military Financing funds, may not be used in such operations".

Israeli forces displaced almost 1,000 Palestinians via home demolitions and destroyed 847 structures in the occupied West Bank and East Jerusalem in 2020, according to the UN Office for the Coordination of Humanitarian Affairs (UNOCHA).

Many demolitions, but not all, have been in the 60 percent of the occupied West Bank - known as in Area C - where Israel retains full control, including over planning and construction.

Israel generally defends the home demolitions by saying that the buildings were constructed illegally and without required permits and approvals, but Palestinians and rights groups have documented that such permits are nearly impossible to obtain from Israel.

Last year, more than 60 Democratic members of Congress made a similar call to the Trump State Department, asking the administration to determine whether Israel had violated the AECA by using US military equipment during such demolitions.

Under the legislation, American foreign military financing to other countries may only go towards internal security or "legitimate self-defence" purposes.

Within a list of queries, the lawmakers asked the State Department if the demolition of civilian homes was considered an authorised use of Israel's annual $3.3bn in American foreign military financing or its US-bought equipment.

It was unclear whether the State Department responded to the lawmakers' request, but many such enquiries were left unanswered, despite mandated deadlines, under the Trump administration.

In Thursday's statement, J Street said such inquiries were now more important than ever, given that "the Israeli government’s disinterest in serious negotiations with the Palestinians toward two states has never been more evident".

"The new Biden administration should act swiftly and decisively to change this paradigm and establish a new norm," the group said.