Children of Wadi al-Tin and the dream of school 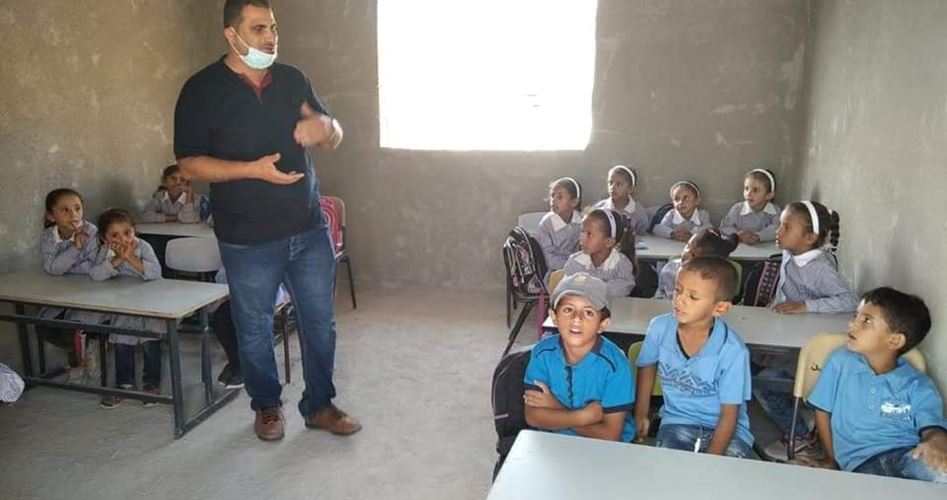 In an incomplete dream, the children of the Bedouin community of Wadi al-Tin gathered in the southern Jordan Valley to obtain their right to education in a school under construction which the Israeli occupation threatened to demolish and stopped the construction work in it.

Muhammad is one of the Wadi al-Tin’s children who hails from the Bedouin tribe of Ka'abneh and lives near the al-Mughayir town in the southern foothills of the Jordan Valley. He hoped that this school would relieve him from the hassle and hardship of traveling long distances between rugged mountains to reach the nearest school in the al-Mughayir town amid dangers and troubles in summer and winter.

Muhammad just like Alaa and other children do not ask for more than one basic school with simple requirements while their parents do not tire of reiterating that this must be available if we truly want to support the Jordan Valley.

Salah Al-Khawaja, an activist in the Committee against the Wall and Settlements, says, “The residents of Wadi al-Tin are descendants of the Ka'abneh Bedouin tribe who are distributed over many areas in the Jordan Valley. Forty Bedouin families live a primitive life in dangerous conditions that have increased the danger of the settlers’ recent attempt to establish a new settlement there and expel them from the area.”

He told the PIC correspondent that there are more than 45 students in Wadi al-Tin community who go by donkeys and tractors to the al-Mughayir village school, 3 km away, to obtain their right to education.

He added that recently the people of the community received funding from an international organization to build a school. However, on 01/09/2020 the Israeli occupation delivered an order to stop the school’s construction and a week later the school was notified of the demolition. This dashed the community's hopes of building a school in their area.

The school was the dream of the children to get rid of the dangers they face on their arduous way towards al-Mughayir town school but the dream remained incomplete.

Ali Hajj Muhammad, a resident of the area, tells our correspondent, “The school has no teachers and no administration despite contacting the official authorities in the (Palestinian) Ministry of Education about this. Despite all these difficulties, students still attend school daily and learn in an unfinished constructed school and under the sun."

He added, “The students hope that the Ministry of Education will assign teachers, as they constantly ask: Will a new teacher come to us. Parents are frustrated at their inability to provide convincing answers to their children and say with deep bitterness “No”.

Ras al-Tinah’s Bedouins are demanding support to strengthen their steadfastness, and most importantly providing the right to education for their children. As the slogans of supporting the Jordan Valley are meaningless amidst the Israeli annexation plan without providing these ingredients, they blame the Palestinian government's slow response to their needs at a time they constitute the real living proof for the Palestinian presence in the Jordan Valley.