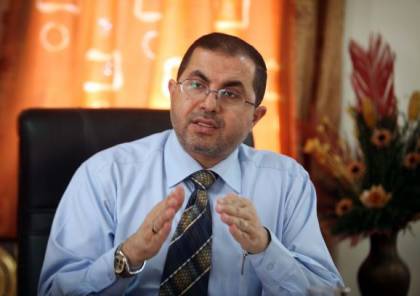 The former Palestinian health minister says the Israeli blockade against the Gaza Strip for more than fourteen years has affected all aspects of life in the coastal strip including health, educational, social and humanitarian aspects, especially as the enclave is facing the Coronavirus pandemic.

Q: How do you evaluate the health conditions in the Gaza Strip in the light of the spread of the Coronavirus?

A: Health conditions in the Gaza Strip are very poor due to the Corona pandemic. Before we talk about the details of the spread of Coronavirus in the Gaza Strip, we must remember that Gaza has been suffering from an Israeli blockade for more than fourteen years; a painful and unjust blockade which affected all aspects of life in the Strip including health, educational, social and humanitarian aspects.

Gaza is facing an epidemic, many countries have failed to defeat it until now, so the conditions are much more difficult in the Gaza Strip. We are talking about a shortage of medicine that meets about 42 percent (of the needs) and a shortage of laboratory supplies that meets about 62 percent, as well as a lack of protective equipment for the health staff, and this is in addition to the general factors that affect the health sector such as poverty, unemployment, and overcrowding.

Regarding the Corona outbreak in Gaza, the first cases were discovered about 3 months ago and since that time, the numbers are increasing exponentially and the ability to contain this epidemic is declining first because of the tough conditions in the Gaza Strip as a result of the blockade.

Gaza suffers from the lack of funding for the essential needs and because of the closure of the crossings by Israel.

Of course, in addition to the congestion problem, as Gaza is one of the most populated areas in the world, it is also facing a shortage of COVID-19 test kits, artificial ventilators, and medical oxygen generators for patients, and in general, the conditions are catastrophic, and we may expect that it exacerbates in the coming days.

Q: What is the impact of the Israeli restrictions on the livelihood and health of the Palestinians in Gaza?

A: The Israeli blockade has affected the health sector in particular and the humanitarian conditions in general, which is very catastrophic. People in the Gaza Strip have been living under Israel’s barrier for more than 14 years, and there is severe difficulty in moving to and from the Gaza Strip. Even patients find it very challenging to leave the Strip to receive treatment in Egypt, Jordan, or the West Bank, and sometimes they need weeks of waiting, as Israel hinders the entry of any health equipment into the Gaza Strip, as well as it hampers the passage of healthcare personnel. This blockade also affected the educational, social and psychological aspects, and health aspects of life in the Gaza Strip, and today we are talking about unemployment of about 60 percent among the youth, while the poverty rate in the Gaza Strip reaches about 80 percent and more than 85 percent of the population of the Strip depend on food aid from international institutions and 75 percent of Gaza’s water is not suitable for drinking, and also about 97 percent of the water from the sea coast is not suitable for swimming and bathing.

Therefore, we are talking about catastrophic humanitarian conditions. Electricity does not reach Gaza about 8 hours a day at best, and sometimes it only reaches 4 hours on a 24-hour basis, and this affects all services that should be provided to people, whether health care services or other ones.

So, we are talking about a catastrophic humanitarian situation and a real human tragedy.

Q: Do you think that Bahrain and UAE’s normalization agreements with Israel will lead to improving the condition for Palestinians, as the leaders of these two Arab countries have claimed?

These countries, especially the Emirates and Bahrain, normalize their ties and establish warm relations with the occupying entity. Of course, this means giving the Zionists the green light to continue their crimes, encouraging them to violate human rights.

We have always warned against such normalization steps and we are sure that they will be tempted to further violate the rights of the Palestinians. We also warn that this normalization will not only harm the Palestinians but harm the regimes that have signed the deal, according to the Arab countries’ experience.

The states that normalized relations with Israel, such as Egypt and Jordan, or even the Palestinian Authority, which negotiated with Israel for 30 years, reaped nothing but destruction and corruption.

Q: What is the role of Bahrain, the UAE, and Saudi Arabia in supporting the Palestinian cause?

A: We cannot deny that Saudi Arabia, the Emirates, and Bahrain over the decades have had positive positions, in support of the Palestinian people at the political, diplomatic, and financial levels, but in recent years this approach has greatly diminished. Today, those who support the resistance are considered terrorists and they pursue anyone who collects financial aid for the resistance groups or supports them politically.

Q: How do you assess the level of Iran’s aid to Palestinian factions in Gaza? What is the most prominent aid by Iran?

A: Most of the national and Islamic factions in the Gaza Strip, especially Hamas and Islamic Jihad, have had a distinguished relationship with Iran over the decades, and the Islamic Republic has provided a lot of assistance to the Palestinian people, especially political and diplomatic assistance, as well as support for the resistance, whether at the financial or military level or training of cadres.

Palestinians appreciate Islamic Republic’s stances because Iran never gives up despite all the challenges and difficulties and all the pressures to dismantle its relationship with the resistance factions in Palestine, especially with the Gaza Strip.

Q: Is there any coordination and cooperation between the Palestinian health sector and its counterparts in other countries?

The health sector in Palestine in general and the Gaza Strip, in particular, seeks to open relations with all health sectors in the Arab and Islamic world, and even around the world, either directly or through international organizations such as the World Health Organization, UNRWA, UNICEF, and other organizations.

However, the volume of cooperation varies from one country to another, and there is close cooperation with countries in the region, but we are keen to ensure that our relations are always open, warm, positive, and fruitful with everyone, as long as they support the Palestinian right and wish to help the Palestinian people in their steadfastness and their fight for freedom and independence.