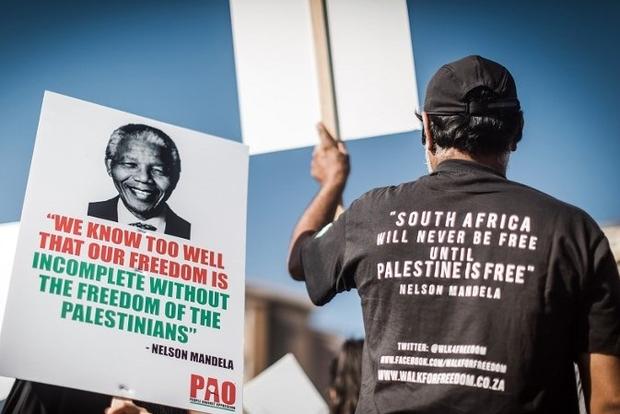 South Africa’s foreign policy and diplomatic positions towards the Israeli-Palestinian conflict have been remarkably steady since the end of the apartheid regime and the election of Nelson Mandela (1918-2013) as President in 1994. Not only have Pretoria’s positions not been altered by the various changes of administrations and South Africa’s ascension to the status of “emerging power” on the international scene, but its actions have also been consistent, sometimes at the cost of its bilateral relations with Israel

Pretoria has recognised the State of Palestine, endorsed the Boycott, Divestment and Sanctions (BDS) movement and supported all Palestinian diplomatic initiatives. The African National Congress (ANC) and the Palestine Liberation Organisation (PLO) enjoy historically close ties, to the point of calling themselves “brothers in arms”. Pretoria has also regularly trained Palestinian diplomats in an effort to rebalance the power asymmetry at the negotiation table. Those political affinities contrast sharply with very difficult and fluctuating bilateral relations with Israel, which collaborated with the apartheid regime, something that has not really been forgiven in Pretoria. However, Israel’s right to exist has always been endorsed fully by successive South African administrations.

South African officials draw a direct parallel between the former apartheid regime and the Israeli occupation of Palestinian land. Like the Non Aligned Movement (NAM), Pretoria considers Palestine, together with Western Sahara, as unfinished decolonisation, which has been a priority on the South African foreign policy agenda since Mandela’s election. This parallel is symbolised by his famous 1997 quote: “We know too well that our freedom is incomplete without the freedom of the Palestinians.”

Pretoria systematically denounces Israeli practices in multilateral forums. “Occupation” appears more than 200 times in South Africa’s UN speeches on the Palestinian question since 2000. “Settlements” have been denounced 189 times, while “human rights” appears 104 times. This is twice as many occasions as appeared in Brazil’s speeches for the same period, another “emerging power” acting upon a similar morality-based concept of “principled diplomacy”.

An increasing number of actors have criticised what is now known as the “broken dream” or “engineered bias” of the Oslo Accords, which have shaped most parameters of the so-called “Middle East peace process”. This process has actually been stalled for the past 25 years, paralysed by power asymmetry at the negotiation table which has been exacerbated by a biased US mediator, a neutralised UN Security Council and an aid model guided by a free-market ideology. By placing economic development as a precondition for political peace, the “economic peace” paradigm has indeed further stalled the process by making Palestinians dependent upon international aid and Israel. It helped to suppress Palestinian resistance to the occupation while clearing the way for the unchallenged expansion of illegal Israeli settlements. As a result, despite Palestinians being one of the world’s highest recipients of non-military aid per capita, all indicators show that their condition now is worse than pre-Oslo.

It would appear logical for South Africa not to endorse such a disadvantageous process for its Palestinian allies. However, Pretoria has far from rejected all of its tacit and official parameters.

Mediation as a non-violent and non-binding means of conflict resolution has been a foreign policy preference for South Africa since 1993 and a core element of the country’s strategic identity. South African officials have been critical of the US mediation, which they deem biased towards Israel. They have accused successive US administrations of aggravating the power asymmetry by constantly siding with and shielding Israel from external pressure, shutting down other more potentially Palestine-friendly actors, and voluntarily avoiding pushing Israel to comply with its legal duties as the occupying power or ending the illegal occupation of Palestinian land. However, Israel’s critics in Pretoria have always been non-confrontational and mostly off-the-record. As the principles of non-interventionism and respect for sovereignty are very dear to South Africa, Washington has never been named explicitly in its official speeches. That has not, however, prevented South Africa from openly criticising the paralysis of multilateral bodies and mechanisms like the Middle East Quartet (criticised in 42 per cent of the total mentions in Pretoria’s UN speeches since 2000) or the UN Security Council (criticised in 43 per cent of mentions), all attributed as a fact to US obstructionism.

South Africa has always been considered by Israel to be too biased to be a major peace broker in the conflict. As mediation is a non-binding mechanism relying on the acceptance of all parties, South African offers in this respect have been repeatedly declined or ignored by Israeli officials. Pretoria has nonetheless carried out a few initiatives. Mandela secretly received Yasser Arafat (1929-2004) and Israeli President Ezer Weizman (1924-2005) in his office on the day of his swearing-in, while the then South African President Thabo Mbeki initiated the “Spier Presidential Peace Retreat” in January 2002. Both initiatives failed.

Pretoria displays systematic diplomatic support for Palestine at a multilateral level, acting as a catalyst and amplifier of Palestinian positions on the international scene. It has initiated and supported countless draft resolutions in favour of Palestine; has gone to every open UN Security Council meeting addressing the Palestinian question; held consistent voting behaviour since 1994; backed the Palestinian UN bid for statehood and more generally the 2009 “Palestine 194” diplomatic campaign; defended Palestinians in all peace conferences it attended; and used its influence to counter recent Israeli diplomatic offensives that could prove harmful to Palestinian ties to other African countries. 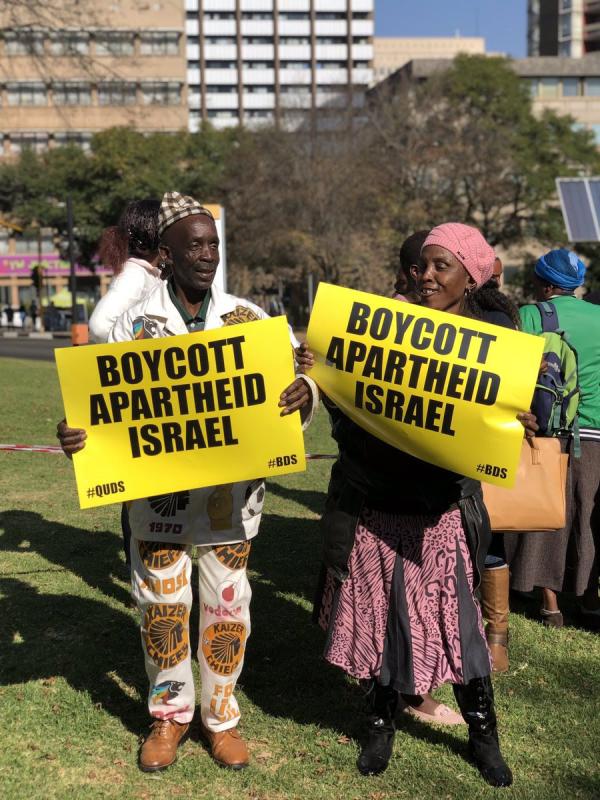 For Quds Day, in Johannesburg, South Africans protest in support of the BDS movement on 31 May 2019 [Afro-Palestine Newswire Service]

Officially, South Africa has been actively voicing its rejection of the general Western aid model, which it deems biased towards the political agendas of Western powers. Pretoria officially engages instead in the alternative model of “South-South Cooperation” (SSC), both bilaterally and through transnational alliances such as the India-Brazil-South Africa (IBSA) fund. Pretoria has pledged to abide by SSC guiding principles in the deployment of its aid agenda.

However, such principles are not respected by most of the major donors contributing to the Oslo aid system in Palestine. Hence, there is good reason to believe that South Africa views this failure of compliance critically.

However, if Pretoria does recall that aid cannot be the only answer to the crisis and that only a political solution could put an end to the conflict, it has never criticised head-on, or fully rejected the Economic Peace paradigm in its official speeches. It has even shown some ambivalence towards key operational actors such as the International Monetary Fund and the World Bank, both of which are US-led, neoliberal institutions wielding tremendous influence over the design and implementation of the economic peace guidelines.

The place and respect of SSC principles in South Africa’s actual aid allocation and distribution to Palestine are also difficult to assess. Details and key indicators of this aid are barely available. This can be blamed on both a lack of transparency – which is in itself contrary to SSC principles – or more simply to the absence of essential documents due to a lack of efficient mechanisms. Pretoria’s contribution to major aid bodies such as the UN Relief and Works Agency for Palestine Refugees (UNRWA) has also always been negligible compared to other traditional and non-traditional/emerging donors.

South Africa officially supports the “two-state” paradigm and all UN resolutions framing it. However, South African diplomats are more sceptical when interviewed off the record. Many no longer believe in the feasibility of an independent Palestinian state, and some wish to witness a shift in Palestinian positions to leave behind the “two-state” goal and focus on obtaining equal rights within a single state. However, Pretoria’s allegiance to the concept of non-interventionism forbids it to press the PLO to modify its agenda.

Furthermore, the conditions that led to the end of apartheid and transition to a single state granting equal rights to all its citizens are different to those prevailing in Israel-Palestine. A majority of Israelis see the preservation of the Zionist project of a Jewish state as a matter of life and death. A single, binational state would in their view eventually jeopardise the very existence of the Jewish people.