Israel annexation plan: We, the Palestinians, will not be deterred 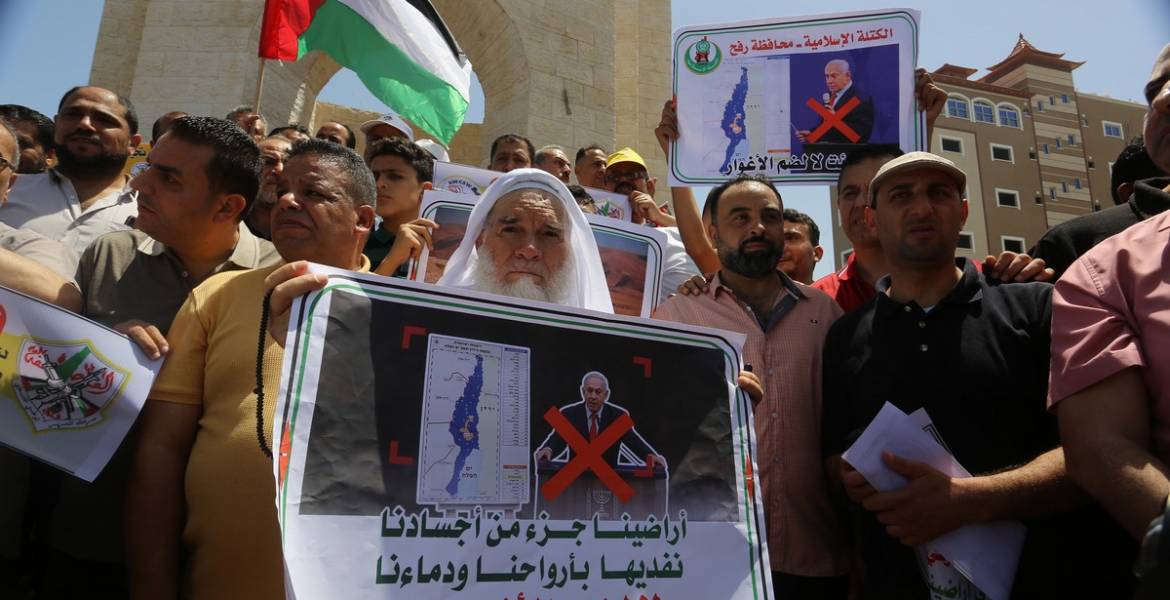 Israel's plan to annex 30 per cent of the occupied West Bank constitutes a flagrant violation of international law - and it is our collective obligation to resist.

George Floyd’s final words, “I can’t breathe”, echoed hundreds of Palestinian children crying out each year under the rubble of homes demolished by the Israeli occupation, which seeks to destroy the hopes and aspirations of Palestinian youth.

The road to resisting colonialism mirrors the struggle against all forms of apartheid. Both paths lead to the same result: freedom. The grave human rights violations to which Palestinians are subjected, and the racial discrimination perpetrated against them with the approval of the US, are not novel in the history of oppressed people.

Not long ago, indigenous South Africans were subjected to violations similar to those that the US “deal of the century” preaches as a just resolution to the Middle East conflict. It is a plan built on illusion - one that carries no peace, other than in its empty name, and fully adopts the Israeli narrative of clear and racist human rights violations, perhaps even more brutal than South Africa’s.

The US plan legitimises the theft of Palestinian land, kills the foundations of a Palestinian state, and corners the Palestinian people into disconnected ghettoes, similar to the segregated bantustans for the indigenous Black people of South Africa - far from their traditional homes and cities, and very much out of sight, out of mind. Bantustans, whether in South Africa or Palestine, provide cover for systematic ethnic cleansing.

The “deal of the century” is desperate political pandering by a US administration remarkable not for its sophisticated knowledge and experience, but for its complete lack of understanding of the dynamics and legitimate aspirations of the Palestinian people.

At the helm stands President Donald Trump, who I would challenge to recite - let alone explain - the contours of the deal, or the political nuance and history of the Palestinian struggle for self-determination and justice.

At his side are a circle of incompetent advisers and family no more learned or seasoned than he is in the fundamental issues requiring an equitable resolution, necessary before a just and peaceful settlement can end more than 70 years of Palestinian pain and injustice.

Be it former envoy Jason Greenblatt, a real-estate lawyer and one-time chief counsel to the Trump Organization; his replacement, Avi Berkowitz, a 31-year-old with a background in real estate and media; or David Friedman, who catapulted from bankruptcy lawyer to the US ambassador to Israel and its most obedient fan; none has been committed to a fair and independent role in the pursuit of peace.

Finally, there stands the president’s son-in-law, Jared Kushner. Anointed as the architect and cornerstone of the “peace” deal, Kushner, once again, has proven himself unfit for the role.

And what has this administration done to establish its care and concern for the health, safety and fundamental human rights of the Palestinian people, or its commitment to the role of neutral arbiter in the decades-old search for peace?

The world has seen this administration push aside, with glaring indifference, such core issues as the status of Jerusalem as the capital of a Palestinian state; the recognition of its unique borders; the fundamental human rights of Palestinian refugees within their own occupied homeland, and in the imposed exile of their diaspora; and the constant expansion of illegal settlements throughout our land.

The US vision is a massive blunder committed to little more than matching the Israeli narrative and surrendering to its extreme right-wing political base.

Having seen the “deal of the century” rejected throughout the Middle East, Israel, with the blessing of the US, now threatens to unlawfully annex Palestinian land in a palpable effort to curry domestic favour. Palestinians will not accept this all-out attack on our history and future.

Israel intends to seize some 30 per cent of the occupied West Bank and impose its “sovereignty” over it, in violation of the Oslo Accords and international law. This move would eliminate the two-state solution that has been fighting death for years.

It also constitutes a flagrant violation of the UN Charter, which prohibits the control of the territory of others by force, and the Fourth Geneva Convention, which prohibits the displacement of occupied persons from their homes and the introduction of settlers. The UN Security Council has repeatedly reaffirmed the prohibition against land grabs, including through Resolution 242.

Although the US has for decades provided financial and political support for the Israeli occupation, the planned annexation is at direct odds with the position of all previous US administrations, which correctly viewed these colonial settlements as contrary to international law.

Despite a marked pro-Israel bias, previous administrations have had the common sense to understand that the settlement of the Arab-Israeli conflict must be the result of negotiations between Palestinians and Israelis.

Yet, with blind ignorance of history and no compassion for justice, the Trump administration believes that it can put to rest the legitimate and unbroken resistance of Palestinians by unilateral diktat and the force of Israel. Like so many other foreign missteps of Trump, this will continue to push the region towards further and further tensions, if not an outright explosion.

We as Palestinians will not be deterred. Using all options at our disposal, we will continue our struggle until Israel’s annexation plans - and all colonial schemes directed at us - are thwarted. This is not just our indisputable right, but our collective obligation as sons and daughters, parents and guardians of generations of Palestinians.

We are no different than any other member of the world community who can lawfully resist a stranger coming to their home to kill their children or displace them by illegal force. Would anyone voluntarily give up their home to one who seeks to steal it? I do not think so, because we are all free, self-empowered human beings.