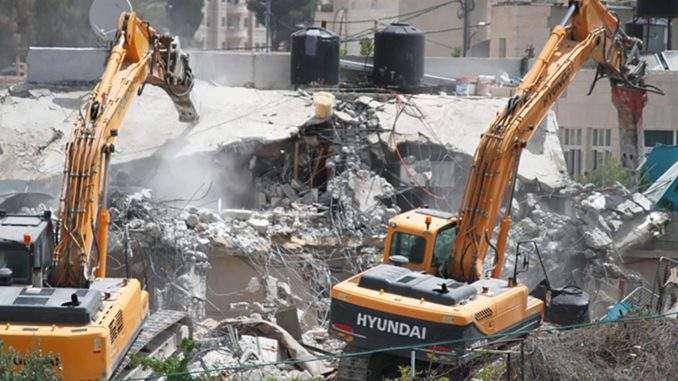 The Palestinian ambassador to the UN has warned officials about the increasingly violent and racist attacks carried out by Israeli occupation forces and extremist settler groups against Palestinians in the occupied territories, including East Jerusalem.

Mansour pointed out that the occupation forces have demolished 72 buildings in just three months, which led to the displacement of 78 Palestinians, including 47 children and 15 women. More than 350 other people were affected by the demolitions. A further 218 Palestinian families, comprising 970 individuals, including 424 children, have eviction cases pending in Israeli courts.

He referred to Israel’s announcement this week of another demolition campaign. Hundreds of demolition orders will be issued across the occupied West Bank, including East Jerusalem, for homes allegedly built “without permits”. Mansour noted that Israeli NGO Breaking the Silence revealed that the occupation authorities routinely reject almost 99 per cent of Palestinian building permit applications. As a result, it is almost impossible for Palestinians to build and develop their communities.

The Palestinian official also referred to the violence of armed settlers who are allowed to spread terror and attack Palestinians, all the while enjoying the unconditional protection of the Israeli occupation forces. Such groups are found particularly in and around Beita, near Nablus, where extremist settler groups such as Lehava, La Familia, Price Tag and Hilltop Youth are found. A 16-year-old Palestinian boy, Ahmed Zaher Bani Shamsa, was shot and killed by Israeli forces in Beita recently.

Addressing the situation in the Gaza Strip, Ambassador Mansour said that the occupation authorities have continued their air strikes on the besieged territory, in violation of the “ceasefire” that came into effect last month. Neighbourhoods in Beit Lahia and Khan Yunis have been bombed, causing severe damage to the infrastructure and farmland.

Mansour highlighted the UNRWA appeal for humanitarian recovery aid, which calls for immediate financial assistance to meet the needs of Palestinian children, women and men in the aftermath of the Israeli military aggression.

He also emphasised the need for the Security Council to fulfil its responsibilities and take concrete measures to implement all of its resolutions. This, he stressed, would require an end to the practice of granting Israel de facto exemption from obeying international laws and conventions. Moreover, he criticised the international community’s unwillingness to blacklist Israel among the violators of children’s rights in times of armed conflict, and described this as a moral and legal failure by the UN.

“Palestinian children face a myriad of dangers and grave violations at the hands of Israel, as reflected in the successive reports produced by the Secretary-General, including killing, maiming, detention, arrest, attacks on schools and hospitals, and blocking aid,” said Mansour. “There is no justification for the UN’s chronic failure to blacklist Israel, which is the first step towards creating a remedial action plan and achieving accountability and justice for Palestinian children who are still victims of violence and systematic Israeli violations.”

Depriving Palestinian children of the protection that they are entitled to under international law in the face of repeated Israeli crimes, he concluded, is “matched by complete impunity” for Israel. “This encourages it to continue committing its crimes. Palestinian children are a primary target of Israel and its raids and military invasions.”