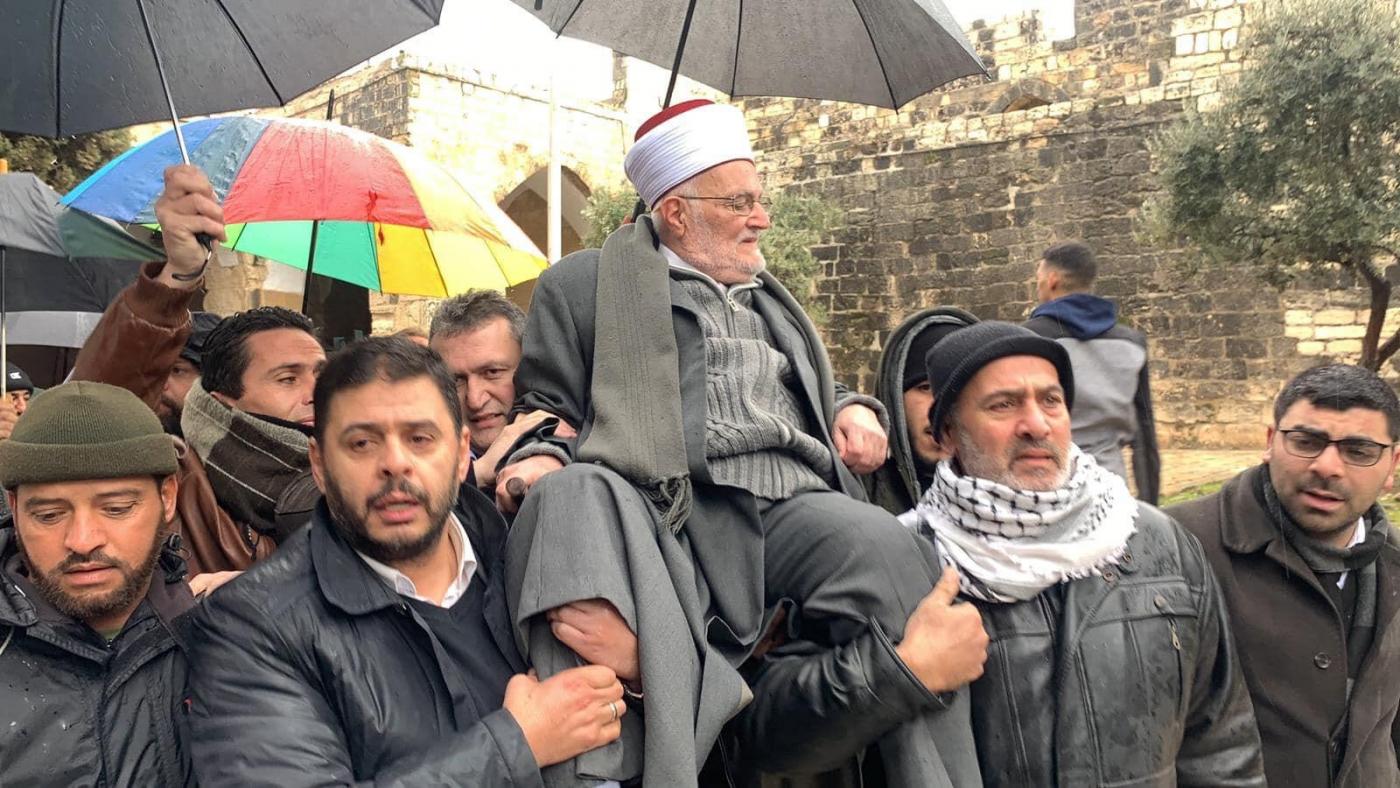 Khaled Zabarqa, Sabri’s lawyer, told MEE that the 81-year old imam “insisted on practising his right to pray and worship in Al-Aqsa, the holiest place in Palestine for Muslims” and perform the weekly Friday prayer.

Sabri was ordered to report to the Israeli al-Qushla police station in Jerusalem's Old City for questioning on 18 January, after he was accused by Israeli police of “incitement” during a sermon he held the day before.

Sabri has been giving Friday sermons at Al-Aqsa Mosque since 1973. He has previously been banned from entering the sacred compound in the Old City several times, particularly in 2000 during the Second Intifada.

He is a notable Palestinian figure in Jerusalem, known for standing up to the daily incursions into the Al-Aqsa compound carried out by Israeli settlers who enter the area under the protection of Israeli police and intelligence services.

Jewish Israelis believe that the Al-Aqsa Mosque compound stands atop where the Second Temple once stood, and some far-right Israeli activists have called for the destruction of the Al-Aqsa compound to make way for a Third Jewish Temple. Non-Muslim prayer is officially forbidden at Al-Aqsa under an agreement with Jordan, the custodian of the holy site.

“The Israeli occupation in Jerusalem uses the law to impose facts on the ground, not to impose order,” Zabarqa said.

He told MEE that people gathered around Sabri as he entered the compound on Friday, recalling that Sabri told an Israeli police officer “that he came to enter, and nothing will deter him, not even arrest”.

Israeli police spread tens of thousands of flyers to residents of East Jerusalem, calling on them to “pray but obey the law” during the dawn prayer.

Israeli police stormed the Al-Aqsa compound to disperse Palestinian worshipers despite the torrential early morning rain, footage published on local media showed. They prevented some Palestinians from distributing hot drinks and refreshments for those leaving after the dawn Friday prayer, known as fajr.

Palestinians in Jerusalem created a Friday campaign known as the "Dawn of Hope" or the "Great Fajr Campaign", urging worshippers to maintain large crowds at the Al-Aqsa compound and the Ibrahimi Mosque in Hebron in the occupied West Bank.

Mazen al-Jabari, a researcher at the Arab Studies Society and a Jerusalem resident, told MEE that the campaign comes as the number of Israeli settlers entering the Al-Aqsa compound is on the rise.

“We want to affirm our rights in the Al-Aqsa compound,” said Jabari, who attended the morning event at the c0mpound.

“They barred people entry to Al-Aqsa, used special security forces to disperse them, and even attacked people who already left the compound and used stun grenades to empty the area," Jabari said. "And despite the terrible weather, people came in thousands.”

Al-Aqsa and the Ibrahimi Mosque are flashpoint sites between Palestinians and Israeli settlers.

Despite the harsh winter and rain, hundreds of Palestinians have been going on a daily basis to perform the dawn prayer since early January, intent on showing Palestinian devotion to the holy places and highlight their rejection of Israeli settler presence.