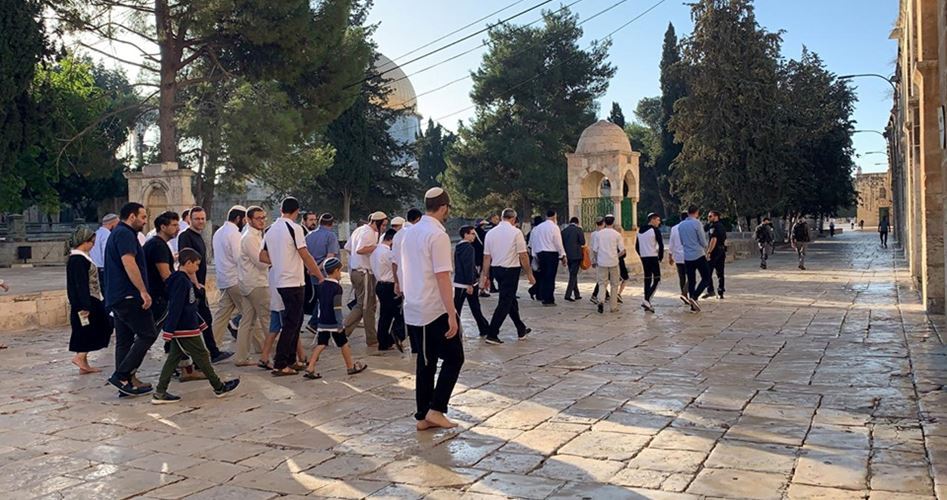 Dozens of Jewish settlers broke into the courtyards of the Al-Aqsa Mosque under the protection of the Israeli occupation police forces on Tuesday.

Local sources reported that the occupation police had opened the Maghareba Gate which is under its full control to secure settler incursions during the morning period.

The sources added that 19 settlers and three Israeli officers stormed the Al-Aqsa Mosque and roamed in its courtyards and performed their prayers in the eastern side of it under heavy police protection.

The settler groups carry out the incursions during the morning round which lasts for three and a half hours while the second evening round lasts for one hour.

The Israeli police are still obstructing the access of worshipers to the Al-Aqsa Mosque who live outside the Old City and the identities of some of its visitors are kept at the gates.

According to the so-called Temple Mount organizations, dozens of Jews who live hundreds of miles away stormed Al-Aqsa during the closure period.

Occupied Jerusalem is witnessing a comprehensive lockdown that began several days ago and continues for weeks due to Jewish holidays and the outbreak of the corona pandemic.

The Minbar Al-Aqsa Foundation reported that 373 settlers broke into the Al-Aqsa Mosque during the past week and during the Sukkot holiday.

The so-called Temple groups renewed their calls for expanding the incursions into the Al-Aqsa Mosque during the Jewish holidays.