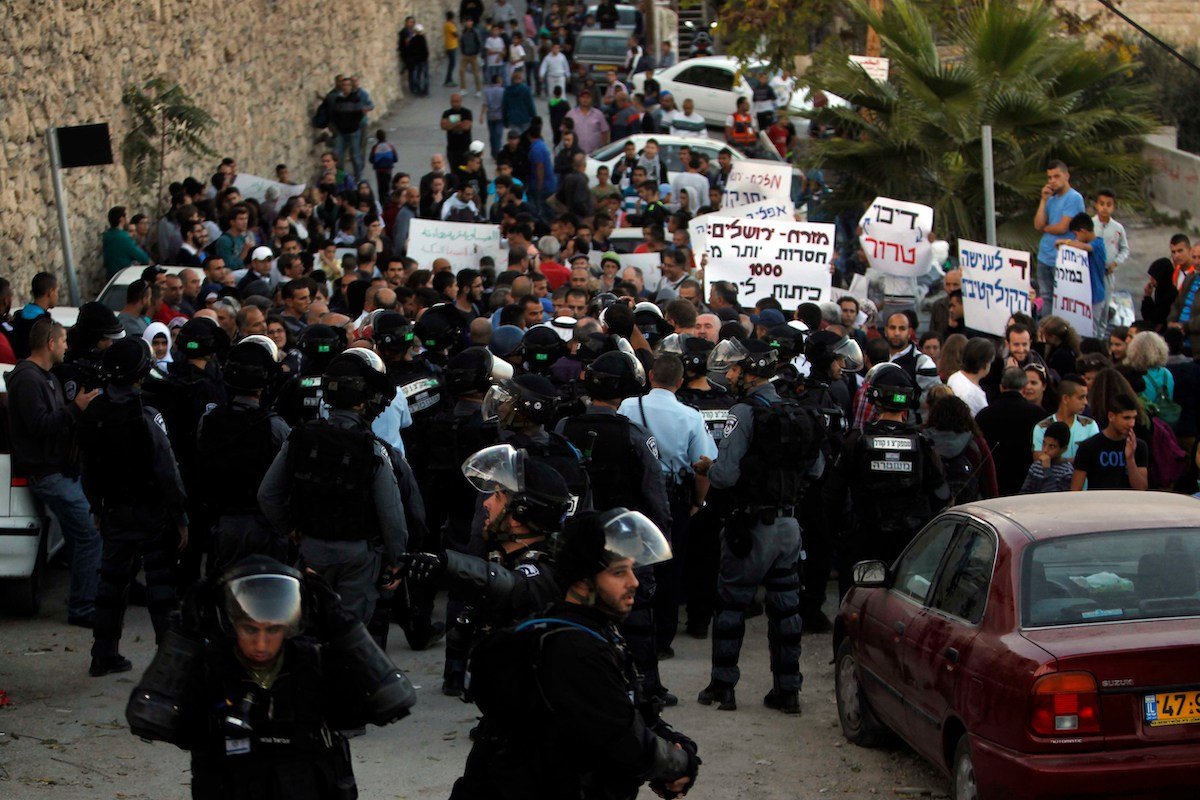 There are 1.5 million Palestinian citizens of Israel, almost 20 per cent of the total population, but the murder rate is disproportionate to their numbers. This has led community leaders to accuse the Israeli authorities and police of not pursuing criminals adequately and seizing illegal weapons. Demonstrations have been held to condemn Israel’s official silence about the crime rate.

The Arab community in Israel is not violent by nature, although there must be, of course, violent individuals within it. Most of the murders in the Arab community are disputes between criminals and domestic violence. It is believed that government discrimination between Israel’s Jewish and Arab citizens has resulted in a lack of resources in the Palestinian community which could help to steer people away from crime. The aforementioned lack of adequate police involvement is also a possibility.

The situation is intolerable, and requires government intervention as a matter of national importance and security. If such crimes had been committed amongst Israeli Jews, they would have forced the Israeli Prime Minister to jump out of his chair, along with the heads of the domestic security services and police. However, this is not happening because the Israeli government regards crime in the Arab community as an internal issue.

There is, therefore, a lack of confidence in the police among Arab Israelis. This is hardly surprising. During 2019, indictments were filed in just 30 per cent of the murder cases in the Arab community; only 22 of the 72 crimes were solved. In contrast, indictments were filed in 58 per cent of the similar crimes in the Jewish community; that’s 21 out of 36 crimes solved.

Such official discrimination against the Palestinians is also seen in education, health and employment. The state spends double on Jewish education, for example, than on educating its Arab citizens. Non-Jewish citizens simply do not have access to the same resources as their Jewish neighbours, and lack equality in matters such as referendums, even on issues like going to war or signing peace agreements. This is yet more evidence of Israel’s racial discrimination against the indigenous people of the land, which almost gives criminals a green light to increase their illegal activities in the knowledge that officials are likely to turn a blind eye.

Ninety per cent of Jews in Israel live apart from Arabs on the basis of ethnic separation. Indeed, many Jewish communities have committees which decide whether Palestinians can live in the same town or village, or if they are “socially unsuitable” to do so. Even those in large mixed cities such as Jerusalem, Haifa, Acre, Lod and Jaffa live under a system of separation, with Jews and Palestinians staying in distinct neighbourhoods.

Jewish settlements near Nablus, in the Israeli-occupied West Bank, on 10 February 2015 [Nedal Eshtayah/Apaimages]

There is strong support among Israeli Jews for apartheid-style separation. One poll showed that 74 per cent of respondents are upset when they hear Arabic, the mother tongue of one-fifth of the population, being spoken nearby; 88 per cent are worried that their son might fall in love with an Arab girl.

Israel’s blatantly racist policies against Palestinians with Israeli citizenship prohibits them from buying or renting property belonging to the Jewish Agency or the Jewish National Fund. Even when a court permits them to buy, the decision remains purely theoretical. Around fifty rabbis have condemned Jews who rent and sell houses to Palestinians. The deputy mayor of Karmiel set up a hotline for Jews to call and inform on their neighbours who sell their homes to Palestinians.

It is difficult to separate such discriminatory policies against Arab Israelis by service providers like municipalities, ministries and universities from the obvious cover provided to them by the Israeli government, which turns a blind eye to these practices. Underpinning all of this discrimination is a legal system which includes the 2018 Nationality Law stating that Israel is the national home of the Jews, and that Jewish and Zionist symbols are the basis of the national anthem and Israel flag. Preference is given to Jewish character over democracy.

The Israeli parliament, the Knesset, plays a major role through the adoption of many racist laws directed against its own Arab citizens. More than 65 discriminatory laws — including, inter alia, the Citizenship Law, the Nakba Law, Israeli Citizenship Law, Land Expropriation Law, Call to Prayer Prevention Law — are now in place.

And it’s not just at an official level that this happens. Israeli racism towards Arabs is reflected by Jews chanting “Death to the Arabs” during national celebrations and public events, and in sports stadiums. Likewise across social media, where it is noticeable that anti-Arab racist posts usually get thousands of “likes”.

Indeed, official statistics reveal that Israelis incite against Arabs every 66 seconds on social media; Facebook is the platform used most for this, followed by Twitter. In 2018 alone, there were 474,250 derogatory, racist and inflammatory posts about Palestinian on social media, largely from Israelis. Facebook’s response to complaints about this is slow. In contrast, if Arab Israelis seek to use social media to show solidarity with Palestinians in the Gaza Strip during Israel’s military offensives, for example, they face aggressive anti-Palestinian campaigns which have the clear approval of the platform as such aggressive posts are not removed.

Social media is a two-edged sword in this respect, because discrimination against Palestinian citizens of Israel has been happening for decades under the public radar. Now it is very easy to publicise transgressions and highlight the real nature of the self-declared “Jewish state”. Nevertheless, much wider action is needed to eradicate Israel’s official discrimination against Palestinians within the state.