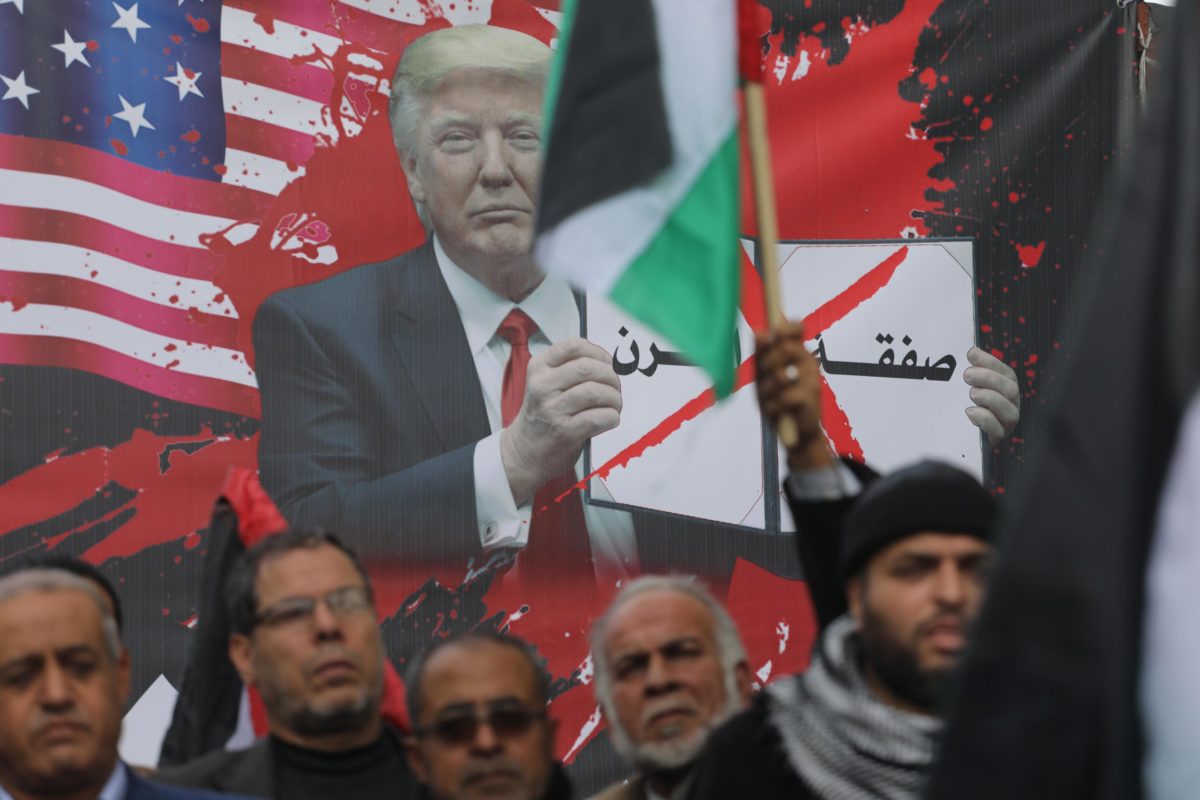 At the request of Palestinian Authority President Mahmoud Abbas, the Arab League held an emergency summit in Cairo on Saturday to discuss Donald Trump’s “deal of the century”. The US President’s plan envisages Israel’s annexation of major settlement blocs in the occupied West Bank, including the Jordan Valley, with the Palestinians having a rump state in non-contiguous remnants of the West Bank and Gaza Strip, plus a small piece of land in occupied Jerusalem for a capital. This would be conditional upon Palestinian recognition of Israel as a Jewish state with an “undivided” Jerusalem as its capital.

Trump proposes that the resistance groups will be disarmed and the Palestinian state would be demilitarised, with no sovereignty or control over its land, airspace, territorial waters, border crossings or, indeed, its borders. “Palestine” would not be allowed to forge any alliances with other states, or even any agreements.

The Palestinians are not alone in rejecting the deal; many Arab, Islamic and other states, institutions and individuals have done so too. Former US President Jimmy Carter said that the deal “breaches international law regarding self-determination, the acquisition of land by force, and annexation of occupied territories” and it “undercuts prospects for a just peace between Israelis and Palestinians.”

Given Mahmoud Abbas’s record of comments and pledges protect the occupation state of Israel, it was confusing to hear him rejecting Peace to Prosperity: A Vision to Improve the Lives of the Palestinian and Israeli People. Taking the case to the Arab League and planning to take it to the UN Security Council was even more bewildering.

Hearing Abbas speak about the plan is like listening to a national hero who would sacrifice his soul and his wealth for the sake of the country. “Jerusalem is not for sale,” he insisted last week, “and nor are the Palestinian people’s rights.” He asked aloud if the Palestinians will accept a state without Jerusalem before answering his own question: “It is impossible for any Palestinian, Arab, Muslim or Christian child to accept that.”

Abbas is also the president of the PLO and Fatah, and he claims that he has no contact with the Trump administration. He said that he is ending the PA’s security collaboration with Israel — which he once described as “sacred” — in response to the deal. During the Arab League summit, he insisted that he has told the Israelis that, “There will be no relations at all with them and the United States including security ties.”

On other issues, Abbas made it known in 2012 that he has given up his right to return. Speaking to Israeli Channel 2 News, Abbas said that he was born in Safed, a city occupied by Israel since 1948, but he did not have the right to return to it. He said he only had the right to visit it. “I believe that [the occupied] West Bank and Gaza is Palestine,” said Abbas, “and the other parts [occupied in 1948 including his birthplace] are Israel.” The right to return is, in any case, an individual not a collective right; it cannot be bargained away.

Insisting that Israel is free to do whatever it wants regarding Palestinian rights and the Palestinians must agree on this and continue security cooperation with the colonial occupation state, Abbas once told Palestine TV, “We walk under the shoes of the Israeli occupation.” According to the chairman of Kulanu Party and former Israeli Finance Minister Moshe Kahlon, “Without security coordination, the PA cannot survive even for a single day.”

In 2017, 2018 and 2019, the Palestinian National Council and the PLO Executive Committee decided on several occasions to stop security cooperation with Israel in response to the continuous violations against the Palestinians. Abbas has never implemented any of these decisions, which should be compulsory. He knows very well that the alternative to security cooperation with Israel is armed resistance, which he believes is “terrorism”.

Now, though, he appears to be serious about ending security cooperation with Israel. If so, does that mean that he is leaving office?

That’s unlikely. This is the same man claiming to be angry about the “deal of the century” and spouting nationalist slogans, who once set out a document with former Israeli Minister of Justice Yossi Beilin that included almost the same terms as Trump’s plan. The Beilin-Abu Mazen document was never adopted by Israel or the Palestinians. To this we can add that, according to news reports, the PA security services met with their Israeli counterparts prior to Trump’s announcement in order to coordinate the containment of any subsequent protests against the deal in the occupied Palestinian territories. Why is Abbas taking such a schizophrenic approach?

While Abbas was demonstrating his anger at the Arab League summit, CIA Director Gina Haspel was sitting with the head of the PA Intelligence Agency, Majid Faraj, in Ramallah. Haspel received guarantees that intelligence cooperation between the PA and the CIA would not be affected, and it was confirmed that security cooperation with the Israelis was ongoing.

Since 2017, Trump has recognised Jerusalem as Israel’s capital; moved the US Embassy from Tel Aviv to Jerusalem; stopped hundreds of millions of dollars in aid to the Palestinians and the UN Relief and Works Agency for Palestine Refugees; and closed the PLO’s office in Washington. With Faraj meeting the CIA’s Haspel, and ongoing security cooperation, what kind of contacts and links have been cut by the PA?

Speaking to Al Jazeera on Saturday, Fayiz Abu Eita, Fatah’s spokesman in Gaza, refused to answer a question about the practical measures that Abbas would take on the ground to prove that security cooperation with Israel has been stopped. He would only say that, “The PA leadership is able to take the appropriate decision at the appropriate time.”

Some clarity was provided to MEMO by Israeli journalist Baruch Yadid, who is close to Prime Minister Benjamin Netanyahu. While Abbas is claiming to be boycotting Israel, “security cooperation continues as usual.”

To see Abbas selling Palestine and Jerusalem and giving up legitimate Palestinian rights, while also crying about the terms of a deal which he has basically also produced himself is surely political schizophrenia at its worst. According to Yadid, though, this is simply Abbas “looking for an honourable end to his political life.”