Three Lessons from Palestine to Overcome the Pandemic 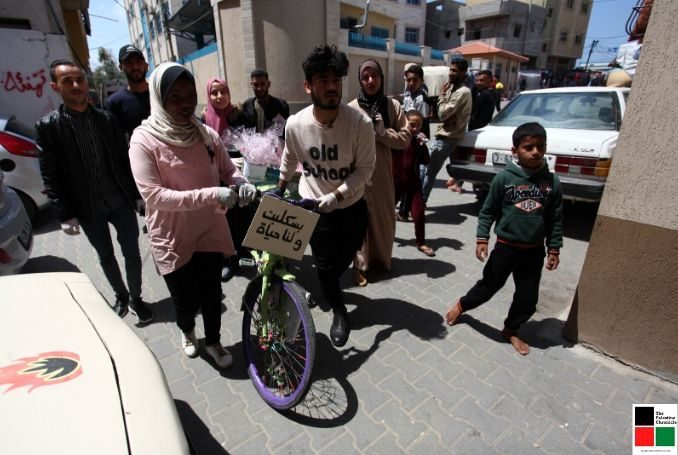 When the COVID-19 pandemic started to bring the world to a standstill, a simple meme with white letters on black background began circulating on social media: “Dear world, How is the lockdown, Gaza”.

The meme provokes some fundamental questions: Will Israeli apartheid and its authoritarian practices be a model for global responses to the pandemic? Will we deepen the divide between those that are to be saved and those that are left to die behind the physical or virtual walls? Is there a lesson to be learned from Palestine on how to build an alternative response that creates a more just and more sustainable post-COVID19 world?

Walls that Won’t Kill the Virus but the People

The experience of most people in the Global North confined to their homes has little in common with Israel’s 13 years of inhumane military siege on the occupied Gaza Strip and the Palestinian people walled off in ghettos and under constant attack by Israeli apartheid. Yet, the migrants at Europe’s borders that, under the excuse of closures due to COVID-19, have been shot dead while trying to cross the fencing that militarizes the borders, evokes the images of the hundreds of Palestinians killed by sniper fire during the protest at the fence around Gaza that walls off the Strip.

The reality in Gaza or in the Palestinian Bedouin communities, where Israel continues to demolish even the most basic health clinics and access to water is systematically cut in order to expel them, echoes the reality of the people crowded in the favelas of Brazil, without access to running water or soap. The Palestinian people relate strongly with the millions of people in India that the anti-COVID19 measures imposed by the Hindu-fascist government have expelled from the cities, in which they worked, and forced to walk days on end, without food only to be blocked at militarized checkpoints at interstate borders.

The ideological walls of supremacist nationalism and racism are coming to the open as the virus spreads. The greetings from Gaza remind us that this is exactly the ideological structure on which Israeli apartheid is based.

A world where some are to be saved and others are dispensable at best and unwanted most of the times, the pervading necropolitics, the exercise of power where entire populations are reduced to ‘living dead’ shows itself in all its cruelty today in Palestine and across the globe.

Being ‘outside the wall’, means that COVID-19 prevention measures stop being useful or are not meant for you. In the case of Israeli apartheid, this results in most Israeli workers being asked to stay at home, while Palestinian workers are asked to stay away from home for weeks in inhumane living conditions and without protective gear in order to keep Israel’s economy afloat. When they fall ill, they are dumped like garbage on the other side of the wall. Even Palestinian citizens of Israel have had to struggle hard to get sufficient access to information in Arabic – the regulations were apparently not really meant for them.

Borders are being closed and walls are rising not only in Palestine but across the globe during this period, even higher and more militarized than before. While they kill those excluded they do not stop the virus.

The question from Gaza ‘How is the lockdown?’ is a question as well for those inside the walls.

The ever-tighter lockdowns and the prevailing state of emergency have suspended civil rights and freedoms and opened the way to a period of extreme forms of biopower, or “an explosion of numerous and diverse techniques for achieving the subjugations of bodies and the control of populations”, as Michel Foucault put it.

Self-isolation, quarantine and contact tracing are important measures against the spread of the coronavirus.  Yet, there are more than only public health concerns to it.

The Israeli way to implement those measures are repressive paradigms and the methods of its military industry, long since tested on Palestinians.

Israel has been one of the very first countries to globally promote its digital spy operation, led by its military security agency Shin Beit, as an anti-COVID19 measure. It could act so fast only because it had already an almost unlimited surveillance system in place, on this scale until now unacceptable in democratic states.

The corporation that advanced the idea of the anti-COVID19 spy operation together with the minister of defense was the NSO Group, the Israeli cyber tech company with close relations to the country’s top military spy agency Unit 8200 and best known for their hacking and spying malware Pegasus. Pegasus transforms phones into spying devices and has been used by some of the most repressive governments around the world to target human rights defenders and journalists.

Now NSO Group promotes its technology to fight the COVID-19 pandemic. Apparently a number of countries are already running pilot studies. John Scott Railton, of the Toronto-based privacy watchdog Citizen Lab, commented that “the last thing that we need is a secretive company claiming to solve a pandemic while refusing to say who its clients are.”

A new framework of ‘voluntary consent’ for tracking apps is currently being tested on Palestinians with a residency permit in Israel. They are asked to download a new app substituting office appointments to control or renew the permits. This app tracks the location and can access virtually all information on the phone, including its camera. In order to install the app users are asked to agree that they provide information that will be used ‘for any purpose, including for security purposes’ out of their ‘free will’.

If such operations were able to effectively save lives, there would be a moral dilemma. There isn’t. Privacy International demonstrates that such systems have been tried with previous outbreaks such as MERS and Ebola and have not been proven effective.

As the lockdowns are gradually lifted, we have to ensure that it is not Israel’s surveillance paradigms and military and homeland security companies to frame the policies. We would not only finance Israel’s military occupation of Palestine but import some of its features to our own lives.

Gaza’s question “How is the lockdown?” sends us a third message: how to resist and build alternatives of solidarity.

The coronavirus has put a battle on our shoulders, much bigger than the health crisis it has provoked. Economic, political and social injustices are coming to the fore.

If we want to come out of the crisis with more equality, more rights, more solidarity and care, we cannot rely on the means and methods of repression, we need to cut the ties of complicity between those that deepen the curve of injustice without an exit strategy and instead build bonds of solidarity.

The Palestinian people are an example of struggle, of the sturdy will not only to survive but to live in dignity. They prove to the world that people have the collective power to get out of this in the right direction.

Palestinians have started from day one to organize against the pandemic. Used to lockdowns and catastrophes and sure they wouldn’t be able to rely on state power to protect them, in Palestinian villages, camps and cities popular emergency committees provide information, sanitation kits and food for the most vulnerable.

Across the world, people are developing alternatives. In Brazil’s favelas, action groups similar to the committees in Palestine are raising awareness and give support. Kerala, a South-Indian state with a leftist government, has excellent successes in protecting the population from the virus showing that even at institutional level cooperation with patients in contact tracing is more efficient than surveillance, grassroots mobilization, and a functioning health care system and social policies are still more effective than repression in fighting the pandemic.

The growing number of webinars and online conversations has brought us closer together than ever. The lockdown has opened as a space for reflection to radically rethink politics. The impact of the pandemic has brought the urgency for unity and joint struggle to the fore of the agenda. Internationalism is not an add on to local and national politics but the very essence of being able to challenge the system that is failing us all, in one way or the other.

The perspective from Palestine can teach us that cooperation and solidarity are the way out and we need to win this battle of ideas. We need health care and social policies not the homeland security and arms industry, surveillance systems and the militarization ready to repress the very movements that demand these social policies.

“Dear world, How is the lockdown, Gaza” is a reminder that freedom, justice and equality for all is urgent, necessary and indivisible.